WBC is a public broadcaster which operates within the RTGame Survival Server. Originally made to be a parody of the BBC, WBC started in New Earth. Due to build server drama, AbruptFern took over WBC and rebranded itself to focus on survival server. The public could pitch and complain about the programs in their discord.

WBC is funded by the public from donations. The donation system of WBC operates within the mall world, which has not been setup yet in 1.16. WBC formerly ran on the archive website before it was shut down, now focuses on YouTube as their platform of choice. The YouTube channel can be found here.

Founded on the first build stream of New Earth, the concept of WBC was a desire to replicate some of BBC's architectural design. The idea of making a BBC Television Centre in West London area was due to it's architecture, not to parody the BBC. Epicnohamdeluxe took the idea further and alongside Callsign_sndwhich, they created the WBC Television Centre in Western Europe. AbruptFern joined afterwards, creating the role Head of Studios and Post Production (a play on BBC Studioworks). During Russia, WBC continued to build more concrete buildings and caused some issues along the way.

AbruptFern's Channel Three, which was created to compete against WBC even though working for them as well, merged with WBC and AbruptFern took over as Director General. AbruptFern took WBC out of build server, onto survival server to rebuild the brand reputation. WBC was first on recording the RT United Nations's second meeting. Establishing the brand as a trustworthy and part of the survival experience. There were plans to build a studio center in Ravenholm/Dynawing, but due to the arrival of Stress Test it was never completed.

The start of the Stress Test didn't have WBC envolved until Pocketoe started to created minigames with PVP. Four games were recorded, but two only made it out of post production. WBC continued to follow Pocketoe for trivia gameshows, but not many were finished in post production. WBC was also split into two subsidiaries, WBC Productions and WBC Resources. WBC Productions handled the production work and helping approve series to be made. WBC Resources was made to help rent out studios and production resources. Around the end of the Stress Test, the RT United Nations occupied the WBC Fortree Centre for the fourth meeting before the 1.16 server was open to the public.

Currently headquartered in Crucible, WBC Redlands House is built into the plateau, with the public mine located near it. WBC Redlands House contains a theater and room for production teams to work in. The building is seperated into two wings, the Classic Wing and the Modern Wing. Surrounding the building are views of the commercial district, along with the lake near the Modern Wing of the building. Bigger studio space has not yet been developed or built on the server.

From the start of WBC, the buildings have been a key role in WBC. In the very beginning of New Earth, the first building was a parody of the Television Centre. Though it was not an exact replica without the Scenery Block or Restaurant Block, the BBC Television Centre replica had a miniaturized Stage 3, 4, 5, and 6. As the build stream wrapped up and another region opened, Epicnohamdeluxe and Callsign_sndwhich created the WBC Television Centre in Eastern Europe. WBC would then later head into Russia, where they created another WBC HQ. Two more builds were also created in Russia, both removed due to size of build and not being used. After both builds were snapped, AbruptFern took over WBC and moved to survival. Though while being bored one day in March 2021, there is one WBC build in South Africa. 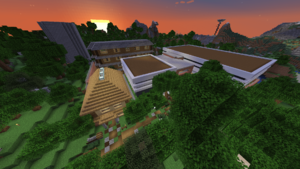 As WBC started to be ported over to Survival 1.14/1.15, the first building to be occupied was in Ravenholm and Dynawing District. The Studio Centre was a remodeling of an existing building, but by the time that construction started, Stress Test was coming. In Sakurium, the Rincon Tower was occupied. From floors 5-13, this was meant to be the hub for news. In Birchside, the WBC Brichside was a backup facility. Though none of this was used, due to Stress Test 1.16. In Silverwhere, the Lighthouse (formerly known as WBC Stresshouse) and the WBC Studio in Whimsy's base were two studios home to gameshows. While these facilities were useful, the major WBC complex in Fortree housed two studios and was the headquarters of WBC until Survival 1.16.

Following the change to survival server, multiple departments were created to simplify WBC. Although there were three started from the beginning, two of them still survive. WBC Creative, the build group department was created originally to ease the transition towards the survival server. The department was eventually closed since no one had interest running it.

WBC Productions is the production department that manages productions and content delivery. Anyone could join WBC Productions via the discord and there are no requirements. There are very few restrictions when creating or pitching a program. As long as they follow server rules, the program has a high chance of being released. News is also a key role in WBC, providing a catch-up and rolling news service that other discord servers can follow.

Recorded in-game events and productions. Commissions are managed by WBC Productions. They can be viewed here.