Crucible is a town located in a Savannah plateau and desert biome and is currently led by Cr33pingD3ath as Mayor, and LonkReborn as Deputy Mayor. The town is the spiritual successor to Ravenholm, although it is stylistically different and is no longer affiliated with The Republic or The New Republic. The name 'Crucible' was chosen due to Cr33pingD3ath's fondness of The Elder Scrolls IV: Oblivion, which has a town of the same namesake in one of its DLC.

Crucible was founded around the 1st week of the 1.16 server, and originally was planned to be a town of The New Republic. After scouting land to build upon, Cr33pingD3ath and AbruptFern chose the Savannah/Desert biome as an appropriate place due to its buildable space and proximity to Silverwhere. The island on which Birthday Island (1.16 - 2021) is located, was one of the few places looked at; and although the island was suitable to settle upon, the search continued and eventually the current location was settled on.

Growth and development in Crucible as a settlement was slow at first, but it eventually qualified to apply for town status and on the 14th of March, 2021, it officially became a town.

Split from The New Republic.

As mentioned above, Crucible was originally destined to be a town of The New Republic; however, due to personal reasons and differing trajectories, Cr33pingD3ath decided to step down from The New Republic Council and shortly after pulled the newly founded town out of the group. In a WBC article published on March 23rd, 2021, Cr33pingD3ath was quoted by reporters as saying "It was a difficult decision, but a decision that I believed was right. Crucible has always been a major project of mine and working with The Republic was wonderful. Although we no longer share the same banner, we are remaining friendly, allied, and open to each other."

The theme of Crucible was originally a dual theme concept of civilization being reborn from the ashes of destruction (war/famine/natural disaster/etc.). Although the theme was only loosely enforced, the goal was to mostly maintain both a modern and apocalyptic feel colliding throughout the town.

Due to some confusion around the build code and oversaturation of more modern builds, the build code was revaluated in late May 2021, and officially changed to earthy/rustic modern and then to adaptive-reuse style modern shortly after.

Residential Area #1 -showcases the modern side of the town's theme 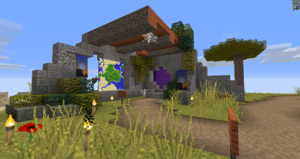 With the different build styles in Crucible, these Points of Interests are important to help showcase Crucible, and welcome people to it.

Replacing the older Welcome Center, the Crucible Nether portal will lead players directly into the town's Community Center, doubling as the town's new Welcome Center as well, with an exit too the right and the Welcome area to the left downstairs.

The North of the Welcome and Community Center lays the Crucible Commercial District, a large section of land dedicated for building a city-like environment for all players to enjoy several shops and amenity buildings such as the Art Museum and Library.

Within the Commercial District lays the Art Museum, a public display of player made Map Art through various vanilla features and plug ins. 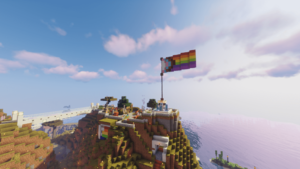 The pride flag in Crucible

Similar to it's predecessor pride flag in Ravenholm, Crucible is host to it's own Pride Flag and dedicated park on one of the neighboring plateaus. The plateau it lays on rests a park and plaque for visitors to enjoy the weather and relax. 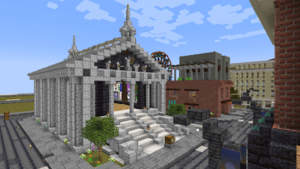 The exterior of the Art Museum in the Commercial District of Crucible.

Underneath the Park of Crucible's Pride Flag lays the Pride Park Museum a Pride Month Project which details various Flags and Orientations with their history for players to learn and enjoy.

All residents of Crucible are required to join the discord.