Godhaven is a major town spanning the entire north border of spawn; it is the largest town by area on the server and includes sixteen districts with varying degrees of independence. Godhaven was founded on the belief that any player should be allowed to build anything, anywhere, regardless of build style or skill.

Godhaven was founded on the first day of the server, July 8th 2019 at the northern border of spawn in a large plains biome; the size of this biome, alongside the resources it supplied are said to have aided the town's growth later into the server's lifespan. With help from one of Godhaven's first residents, alconyepiedes, the (then) largest farm on the server was built, which caused many people to move in.

The center of Godhaven is mainly residential. A lot of players used it as a starting town. Very few developments were made in the center of town since all the land was built on. As the mayor never wanted to destroy houses and buildings, even if the owner went completely inactive, there was not a lot of space for new players to build. This is how Godhaven started it's rapid expansion. Lots of people were active on the outskirts of the town, which resulted in the development of multiple districts and taking over other districts.

History on the Districts

Dickington was bought by TheJmqn for 32 diamond blocks. These blocks were all donations from players in and around Godhaven. The mayor of the town, Dang1738, sold the town because it was inactive at the time. There is still a sign at the old border between Dickington and Godhaven.Jamestown joined Godhaven the same day Godhaven bought Dickington.

The Godhaven Savannah was once a desert. Players have dug out that desert completely, and left the remains. The mayor, TheJmqn, decided to transform this desert into a Savannah. A project was set up, called the Godhaven Savannah project. Players would gather grass blocks and cover a huge part of the half dug-out desert to create the Savannah.

Stackton started out as a small farm run by TheDucktato. The town started growing rapidly once it became a district of Godhaven. Due to the town's growth, Stackton's status with Godhaven was promoted into an equal union partnership.

Dublin was once a district of Godhaven. The district saw massive growth due to the then current mayor, DrthVrdr, spending a lot of time into improving the district. The town then declared independence. It still has friendly relationships with Godhaven.

Both Dublin and Stackton became independent after an agreement between all the mayors of the town, called the Stackton Union. They are able to use eachothers farms and establishments. However, Stackton and Dublin are technically independent from Godhaven.

A progression of Godhaven's expansions and the surrounding settlements over time

Godhaven has one of the most relaxed town rules on the server; as long as builds do not interfere with another person's, and abides by the server rules, it is allowed to be built.

The Seventeen Districts of Godhaven 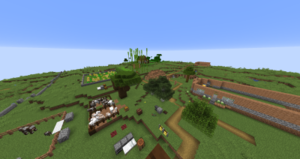 An image of Godhaven on the second day of the server (6-9-19). The large farm and first animal farm are visible. The first three houses of Godhaven seen in this photo are all still there today.