Gamer Lake is the self proclaimed "Poggiest and Gamer-est" settlement located around a lake in a Birch Forest. It was founded by the user Friedtoast77 on 14 February 2021, and had a few members join soon after.

On the day the 1.16 server first opened, Gamer Lake's founder, Friedtoast77, and two of his friends, Woulou and PaperMarioGaming, had already decided they wanted to form a settlement/town of their own. They had been brainstorming ideas for what to make and names for their settlement but never came up with anything that stuck. The next day, Fried stumbled upon a lake in a birch forest with a landmass floating above it. He decided this is where they would build their town, and named it "Gamer Lake" based on a gag the trio had where they added "Pog" or "Gamer" to the beginning of almost anything.

The Early Growth of Gamer Lake

Soon after the founding of Gamer Lake, PaperMarioGaming would move to the location. Another User by the name of DrthVrdrMarenghi would soon join and build a lot of the paths, bridges, and buildings in Gamer Lake. These buildings included things like the villager breeder, the fishing docks, the courthouse, and the current version of the floating island.

On March 3rd, Woulou logged back on for the first time since the server started. A few days earlier, Drth had left Gamer Lake to live in Hermit's Quarry; Woulou picked up where Drth had left off, finishing the path around the lake, adding better lighting around it, constructing the Pogway, and making an info board at the entrance portal. After two new members joined, Gamer Lake was finally qualified to apply to become a town.

On 17 March, only about a month after being founded, Gamer Lake had officially become a town.

It is only asked that you put effort into making you builds look somewhat nice (Don't make a Box house). It is also required you ask the Mayor about any large projects you would like to build for the town before starting it. (small things like a small private farm or a Storage shed are fine without permission, but things like, a large farm or a tower of some kind are examples of big projects) 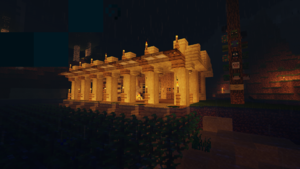 An area with a lake for players to use for fishing. The building on which the docks sit has several chests for organizing fishing loot, roof access to fish from higher up, a bed to stop Phantoms, and a lava pit for throwing away unwanted junk. 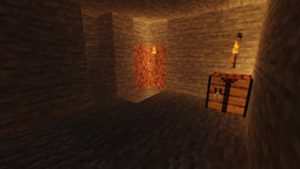 The entrance to the Gamer Lake Mines

The Gamer Lake mines are a simple set of Strip mines at Y-level 11 where Gamers mine for resources such as Iron, Coal, and Diamonds. It has many strip mines branching off the main tunnel, as well as the Pogway and Poglane (see below). 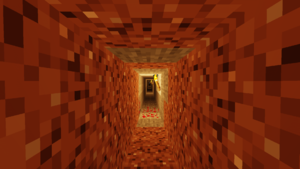 The Pogway (or 2076th Parallel) currently being dug out. Construction will most likely be completed sometime in April of 2021.

The Pogway (also known as the 2076th Parallel) is the second failed project by the town's current mayor Woulou to create an Iceway in the Overworld at Y-level 11 across the entirety of the Z-coordinate 2076. This would've created an infinite tunnel due to how both world borders teleport the player to the opposite side of the map. It was cancelled due to not just player claims, but spawn itself.

The Poglane (also known as the 2188th parallel) is the prototype of this looping tunnel but was dug on the Z-coordinate 2188. It was unsuccessful due to multiple player claims that were going to be dug past the Y-level 11 were in the way. The tunnel still remains finished and can be walked down, but there are no plans to add packed ice to the Poglane. 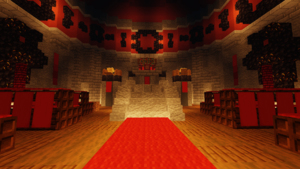 An inside view of the Gamer Lake Courthouse

On the outskirts of Gamer Lake is a courthouse made by Drth; it is currently the largest structure in the town aside from the mines. The courthouse has no real purpose yet, as no court cases have been held in the town, but it is a great structure and worth a visit if you travel to Gamer Lake.

The outside of the Gamer Lake Villager Breeder.

A very safe and not at all torturous area where the Gamers keep a pretty big population of Villagers of many differing professions. As of writing this, all 3 of the Original Villagers have unfortunately died. In fact, there still is not a replacement farmer in the breeder. The Lake's goal is to have one of every class, and a few good librarian enchants. 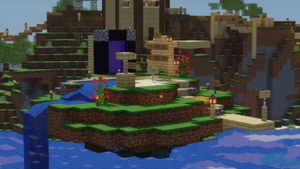 The Floating Island above Gamer Lake.

This island floating above the lake is where the portal leading to Gamer Lake is located, as well as the info board for the town. it features a small pond with a waterfall, a diving board, and a dog dubbed "Pog Dog".