Ravenholm is a town on the 1.14 server and a founding member of The Republic. There are currently around 45-50 members working to grow and expand the town and community. Ravenholm is a relaxed place to live with very few rules and building restrictions. 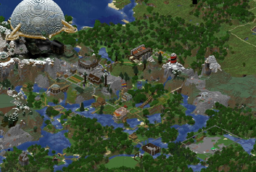 Ravenholm was originally a town that failed to gain life due to numerous circumstances. Around August of 2019, the much larger town of Somewhere was running low on room, so an agreement was made between Somewhere's Leaders and Ravenholm's Founder (CodedTechless), that the town of Somewhere would run and populate Ravenholm as a district of Somewhere. After some minor drama with a non-residents build, Somewhere began to work on and populate the town with new users. Some of the first builds made were the community farm, communal storage center, some basic paths, a rail line connecting to Somewhere, and an unsuccessful villager farm. This new alliance also inspired the re-imagination of the Somewhere Netherhub area to provide a more welcoming entrance to Somewhere as well as its connection with Ravenholm.

In early November of 2019, CodedTechless stepped down as Mayor due to life events, and as of Nov 7th the Leaders of Somewhere elected to make Cr33pingD3ath the new Leader and Mayor of Ravenholm. With this change in leadership and then officially gaining town status as of Nov 28th, Ravenholm's population grew exponentially, becoming one of the most active communities on the server.

With Ravenholm becoming it's own town and growing rapidly, Cr33pingD3ath saw an opportunity to help the nearby settlement of Dynawing grow and prosper. After Dynawing's Founder (Archisame) had recently returned to the server after a period of inactivity; he and Cr33pingD3ath came to an agreement (like that of the original agreement between Ravenholm's Founder and Somewhere Leadership) that Dynawing would become a district of Ravenholm.

While Ravenholm had made its way in becoming its own town, it was still very much connected and intertwined with Somewhere; even sharing the same discord server. After some careful thought and deliberation, the Leaders of Somewhere and Ravenholm agreed that reorganization was overdue and agreed to form an equal and cohesive union, establishing The R.S. Republic as of Jan 07, 2020.

As of Feb 3rd, 2020, TILR16 was promoted from Trusted Resident, becoming a new Leader of Ravenholm; alongside Cr33pingD3ath. Having a 2nd leader was decided to be of utmost importance due to the rapid size and population growth of both Ravenholm and Dynawing District; allowing for both areas to be more actively oversaw and governed.

Points of Interest and Major Projects

—There are a number of projects in the works for Ravenholm, as well as many completed ones. 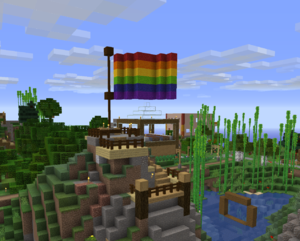 Pride Flag made by resident Dean_Craft 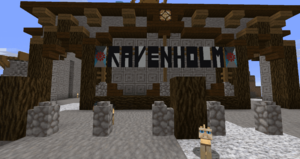