Not Dublin is a town located due south of Spawn, which can be accessed via the Blue Highway. The town was established by TeamwinFTW, Mattimeith, and Angry_Chef near the location of TeamwinFTW's original base. The town began as a settlement on November 12, 2019 before officially becoming a town on December 9, 2019. On March 16, 2020, Not Dublin declared itself the Kritarchy of Not Dublin.

There are currently thirty-seven residents of the town, some of whom do not have active subscriptions or are relatively inactive. Residency is chiefly established by contributing to the town through the construction of a structure and access to the storage building is coupled with residency. Dual citizenship is allowed, although not preferred.

Contrary to popular belief, the naming of Not Dublin was not based off of the town (then district of Godhaven) Dublin. In fact the founders of the town did not even know of the existence of Dublin when Not Dublin was established. The name "Not Dublin" originated from the fact that spires were constructed after the completion of the courthouse and thus a spin-off of real life Dublin's name was birthed for the meme. At that time it was never expected that Not Dublin would grow to the prominence it has today. If it was, it's likely the name would have been something else entirely.

When the town was first added to the Dynmap as a settlement, it was actually called "not Dublin" on the marker, resulting in even greater confusion as to the proper name. This was later fixed.

Not Dublin was founded on November 12, 2019 when TeamwinFTW and Angry_Chef held a coup against the oppressive reign of MrSergeant. MrSergeant had intentions to write a server-wide constitution and build a courthouse to settle disputes in, to which the the former two parties as well as Mattimeith agreed to aid in. Within impressive time however, disputes ironically broke out among the four members regarding what exactly to include in the constitution. MrSergeant then went AFK and was soon followed by Mattimeith. Upon MrSergeant's return, he requested to examine what had been written thus far in his proposed constitution. He then began editing the constitution in a very non-democratic manner, entirely to the dismay of TeamwinFTW and Angry_Chef who had continued working on the document in his absence. After some haggling, the constitution was eventually handed back over to TeamwinFTW and Angry_Chef, who then decided to steal the constitution and abandon MrSergeant. Mattimeith returned just in time as they left and made the decision to join the pair. The three then found refuge in the shadow of TeamwinFTW's original mountain home and decided to construct a courthouse of their own.

Within time, the courthouse was finished. Spires (modeled after Mattimeith's original design in Aesha), a graveyard, and a small warehouse soon followed. As Not Dublin grew, it was quickly realized that it was destined to become a settlement. And so it did: the settlement was added to the Dynmap by moderator Tklots. The construction of the town hall then followed shortly thereafter, and the town only grew from there, growing to include a storage building, automatic smeltery, and rail station. Along the way Mattimeith also created a fitting banner design.

Magmaticsleet13 was the first non-founding resident who joined the town in early December 2019. Magmaticsleet13 almost instantly was promoted to ambassador of the town and began planting embassies in all other towns around the server. Soon thereafter under the persuasion of Magmaticsleet13, N1ght_Shade joined the town as well, allowing the then-settlement to officially be promoted to town status. On December 9, 2019, the settlement of Not Dublin was officially declared a town and the Dynmap icon was updated by administrator Katuen.

On December 10, 2019, Not Dublin was invaded by SergeyMeyer's Snow Empire. He randomly appeared in the home of bookworm918 (who was a new citizen at the time) and began mass spawning snow golems—presumably with snow from the 2019 Winter Event. He then challenged any citizen of Not Dublin to fist-only combat; if he won, he claimed the right to assume sovereignty over Not Dublin and would annex it into the Snow Empire. In the end it was bookworm918 who was chosen as tribute. The result of the battle was a decisive victory for SergeyMeyer, who won by three health points. Shortly thereafter, SergeyMeyer announced his decent upon Not Dublin and requested a place to erect a snow fortress. Mattimeith provided him a spot atop the mountain adjacent to the residential district and SergeyMeyer built his fortress. In the end, Not Dublin survived the attempt at annexation and maintained sovereignty, but the fortress still stands today. The fortress has since been significantly added to by Mattimeith in effort to improve upon the original design.

On December 23, 2019, MrPippen began construction on a replica of the Crystal Tower from Final Fantasy. Located directly southeast of the Villager Trading Hall, the tower is an extremely tall spire-like structure made of packed ice. It has satirically been dubbed the "M E G A Spire." Soon after he finished the build, MrPippen established a small settlement (The Vale) south-southeast of Not Dublin, but never became an official resident of the town. Although the tower is not a perfect copy of the one from Final Fantasy, a keen eye can still tell what it's supposed to be. 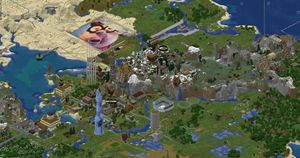 Dynmap view of the town, depicting most territory

Banoffee_Pi joined the server on January 7, 2020 and built a home in the prairie east of Not Dublin. Mattimeith immediately noticed this and Banoffee_Pi was quickly contacted. Within a day he became a de facto resident of Not Dublin which led to drastic expansion of the Not Dublin road system and claimed territory. After upgrading his original wooden home into a beautiful masterpiece of detailed work, it was seen that he was an amazing builder. He was immediately given rights to the storage building and in the early hours of the morning on January 9, 2020 he began construction of the Not Dublin Cathedral. He completed the Not Dublin Cathedral on January 12, 2020 and on the same day began construction of the Not Dublin Trinity Library. He has worked on several large-scale projects since, all of impressive detail and grandeur.

After substantial growth, Not Dublin declared itself the Kritarchy of Not Dublin on March 16, 2020. This move was motivated particularly by the existence of the Republic, in addition to the influence that Not Dublin holds around the server. Following this came a dramatic expansion of claimed territory. It also initiated the formal incorporation of Not Dublin's several distinct districts and settlements. Those currently standing as kritarchs are TeamwinFTW, Mattimeith, and Banoffee_Pi. 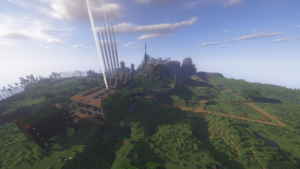 Not Dublin in its earlier stages of building 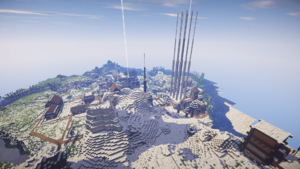 Not Dublin during the winter 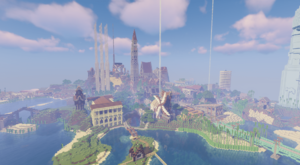 Not Dublin with shaders

The districts and settlements of Not Dublin are as follows, in sequential order of establishment or absorption:

The exclaves of Not Dublin are as follows, in sequential order of establishment or acquisition:

The autonomous districts and exclaves of Not Dublin are as follows, in sequential order of establishment or acquisition:

The former districts of Not Dublin are as follows, in sequential order of emancipation or absorption: 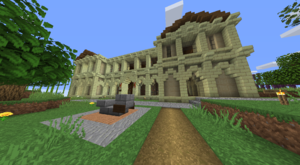 The Trinity Library is a build constructed by Banoffee_Pi. It is modeled after the Trinity College Library, a beautiful and iconic building located in real life Dublin. The purpose of the Minecraft library is to serve as a hub containing copies of as many signed books as possible from the server, preserving them and in certain cases allowing those who wish to receive a copy to be provided one. Legitimately written books on the histories of towns, poetry by Mattimeith, and books full of memes can be all found inside. All players, whether resident or not, are welcome to access the books. The library is claimed, but access trust has been made public. 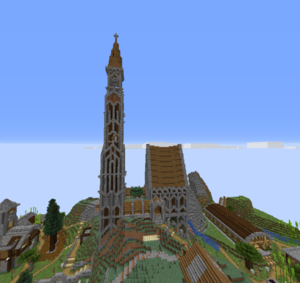 The Not Dublin Cathedral was built entirely by Banoffee_Pi after he became a de facto resident of Not Dublin. Its construction began in the early hours of the morning on January 10, 2020 and was finished the evening of January 12, 2020 GMT. The cathedral has caused a small increase in tourism to the town once completed. It stands as a must-see landmark for all visitors.

The design elements of the build incorporate those of a Catholic church, a Greek monastery, and Not Dublin's theme of spruce wood and stone bricks. These elements come together to form a unique and well designed building. The west wing consists of an extremely tall spire stretching from ground level to well above cloud level and is connected to the center of the build, a grass courtyard surrounded by a covered walkway. The east wing consists of a tall nave which includes pews, an altar, and pulpit. The nave also features a large stained glass window of the Not Dublin banner and a book called the Book of Not Catholicism.

The Wheezer Zone is a large flat pixel art created by Banoffee_Pi. It depicts Carl Wheezer, the fat kid from Jimmy Neutron, making an odd face with his mouth open and his eyes closed. The build has become a notorious landmark, particularly after being featured by RTGame himself during a tour of the survival server.

The build was finished on April 2, 2020. All maps are watermarked in order for Not Dublin to keep a hold on the economy of the watermarkless ones. Maps are currently unavailable at this time.