Sai City is a town located in the south-west area of the world; founded in mid-October 2019, Sai City aimed to create a pleasant community of citizens within an aesthetically pleasing town. While, previously, the town was often seen as a sequel to the neighboring town of Sakurium, Sai City merged with its larger counterpart.

Sai City was originally created as branch from the town of Sakurium - an urbanization-centric city which was considered inactive at the time. Sai City, in comparison, acts as a suburban area, featuring different build themes for each of its districts.

Sai City was created when many of Sakurium's active members wanted a fresh start on the server, subsequently building a settlement downwind of the original town. While only 10 players joined for the new settlement, several structures were created in aims to benefit both the town and the server as a whole.

Eventually, Sakurium merged with Sai City, removing the Sai City's status as a branch of the former town.

The entrance of Sai City resembles a decrepit Roman ruin alongside a worn and broken-down aqueduct; it is fitted with lots of detail, a rule-board, and a wall with a map. 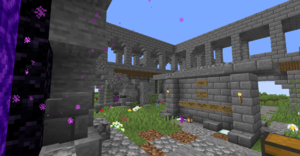 The main entrance into Sai City, alongside a broken aqueduct

A place where people can place their materials and ingredients for other townspeople to use; it is equipped with every type of furnace, large amounts of chests and barrels, a mini enchanting room, and, finally, a stonecutter and grindstone. The second floor also has two beds, in which new townsfolk or travelling visitors can sleep for the night. 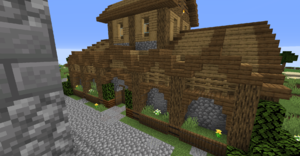 A place filled to-the-brim with animals which is free to the public for materials and consumer goods. Animals are free to be bred, and you are allowed to kill them for ingredients as long as a minimum of two of each species are left behind.

The Tri-use aqueduct is a winding section of border-wall that wraps itself around the town; once finished, it will be capable of transporting water to agricultural areas, be used for quick boat transportation around town, and act as a protective border wall.

There was multiple districts within Sai City, each with their own policies; the districts include:

Sai City is the main residential area of the town, and will soon contain most of the public builds (including the planned buildings: Golf Course, Mega Mall, Colosseum, Library, Lava Pagoda, etc.)

One of the biggest modern towns in the server, Sakurium contains metropolitan skyscrapers and other massive concrete structures. Due to inactivity, the town closed and became a district of Sai City instead. Markthomas007 was revamping Sakurium, and hoped to open it back up again before reset but that never happened

A machinery sandbox that is perfect for building public or private auto-farms.

An ashen, flaming, charred island covered in dead trees, bushes, and dilapidated old buildings; if you want to build a specific build style relating to a post-apocalyptic society, this is the place to go.

[M&P Enterprises] was an exclusively owned region within the Cobble Canyon owned by SergeyMeyer - its size classifies it as a sub-district.