Bergstad can be found midway down the green highway in the netherhub, with its own minihub of portals leading to various locations in and around town: the hilltop church (main portal), the Shopping District, Brexit, and Beta Town, to name a few. The two main forms of transportation in Bergstad are the Sky ice highways and the underground Metro (under construction).

Started by first mayor Jondayo and snomss in June 2019, Bergstad originally began as nothing but a few savannah fields and cliffs with a few houses and farms, slowly being terraformed into what you see today: an ever-expanding, flourishing city with several of its own farms, skyscrapers, and sights to see.

Jondayo oversaw the initial construction of the town as mayor, and her original skyscraper home has remains in Bergstad in memory; she was a warm, welcoming mayor, and her final acts included inviting (then new-to-the-server) ceynomore to live in the town, and electing Tillion_23 as her replacement; Tillion_23 became the second mayor of Bergstad when she stepped down in the early August of 2019.

During Tillion_23's term as second mayor, a town council was formed with Tillion_23, ABold1, and ceynomore (three of the last active residents at the time), and the town continued to focus on expanding and recruiting new residents. With Tillion_23's and ceynomore's expertise in building and farming respectively heading many new projects, (including the Bergstad Zoo, the Giant Wii, and farms focusing on making the town self-sufficient for resources), Bergstad began to really establish a stronghold in RT's server. While on the council, ABold1 also contributed to parts of the town, including helping in the construction of the town hall and the pizza place. ceynomore eventually became Tillion_23's second-in-command as ABold1's activity on the server declined, eventually retiring from the council entirely.

It came to pass that Bergstad and [REDACTED] soon crossed paths in Brexit, a small satellite town owned by a resident of [REDACTED], BinFisher99. ceynomore had taken over Brexit believing it to be abandoned by an inactive player, and when that player (BinFisher99), returned, she notified them of what had taken place and ceynomore and BinFisher99 struck an agreement and used Brexit mutually for some time. This eventually led to ceynomore, Tillion_23, Mess_Nova (another [REDACTED] resident), and BinFisher99 becoming friends outside of the server.

It was around this time that Tillion_23 entered a friendly wager with Mess_Nova and BinFisher99 after they discovered his gambling addiction, and after Tillion_23 attempted to wager the entire town during their bets - fortunately, ceynomore discovered the plot and stepped in. According to rumours, Tillion_23 won 11 consecutive coin tosses during an unsanctioned bet outside of the server and somehow ended up betting the entire town for the 12th toss, which he then lost. When ceynomore, second-in-command at the time found out, she put her foot down and refused to acknowledge the legality of the coin tosses -- which of course meant either warring with their [REDACTED] friends, handing the town over (not an option for ceynomore), or finding another solution. A more peaceful solution was agreed upon; a final coin toss was held, causing Mess_Nova and BinFisher99 to relinquish any claims on the town - after the event, ceynomore was officially named third mayor of Bergstad, and remains mayor today. Additionally, Bergstad and [REDACTED] became official town allies, establishing free trade between both towns, and with Mess_Nova being named a council member by ceynomore.

Bergstad has many points of interest throughout the town and many places to visit, from functional farms to recreational builds to giant sculptures, including:

Located on the seafront on a small island connected to Bergstad mainland via bridge, the Bergstad Zoo is now open with tickets costing only one iron ingot! The Zoo is the place to go if you want to see your favourite animals and mobs from around Minecraft. Check out our panda exhibit and then grab a fresh, delicious burger from the Zoo WcMonalds.

We currently have exhibits for the following animals:

The RT federal reserve is the building with an underground vault used to store RT's gold. The vault also holds the Holy dirt block given to us by Ashaneru.

The vault held over 50 blocks of gold until they were taken and used to build a beacon. (But we just say that RT took the gold)

The underground City is a place for those who hate daylight or Phantoms to go. With all the necessities any city needs, such as a police station and a farm with no seeds. So rent one of the many non existent apartments And enjoy peace of mind away from the phantoms.

Located on the outskirts of the Town Cobble Town is a place for the upper-class to live in peace with high ways, The town sits on a slab on cobblestone that took over 5 hours and a broken mouse to build.

The i want die room is the best place to go in order to see I want die, the best Mii in the world. 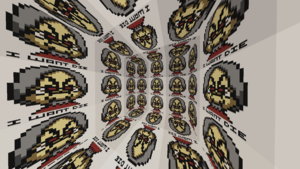