Labyrinth 3.0 is created by Abielek as a sequel beloved, Labyrinth 2.0 and Labyrinth.

Upon completion of Labyrinth 2.0, Abielek still had new ideas for other levels which could be used to push players to their limits. So with that in mind, and tied in with the fact that many people enjoyed Labyrinth 2.0 and wanted more, the planning for Labyrinth 3.0 had begun. It started out as a massive dig project. At this time, the only thing certain was that it would have to be bigger and better than its predecessors. In December of 2019, with the help of loudlara, the pit was dug out and covered up so that no one would be able to see inside. It would remain this way for a long time. Some initial work was done on the early levels, but due to other projects and lack of motivation, by February, it was looking as if Labyrinth 3.0 would become just a dream and nothing more. Then in early March, a new idea hit Abielek, what if, instead of everyone being a winner, there was only one winner. And in addition to that, what if there were no checkpoints, making reaching the finish line a very painful experience for anyone who wished to attempt it? And so with this in mind, and a release date announced to hold him to completing it by a deadline, the remainder of Labyrinth 3.0 was slowly completed, taking inspiration from real world, other video games, and even Reddit.

The grand opening was set for May 2, at 12:00pm Central Time, but it was clear it was going to be tight finishing it. While the interior was almost done, the stone brick building looked hideous. So Abielek enlisted the help of MrSergeant to design the exterior of the building, as well as Kassen, Cynder, and EliteKnightSlayer to play-test and ensure it was possible.

On May 26th, 2020, Katuen and NotKatuen created a locked prefix for anyone who is able to make it to the end. In addition to this, they offered to create custom achievements, not just for Labyrinth 3.0, but also for Labyrinth 1 and 2.0. This began to generate a large amount of players playing the original ones again, bringing a new life into them that they had not seen in months, while also building excitement for Labyrinth 3.0. In addition, the lava parkour level on Labyrinth 2.0, originally popularised by the moderator Dang dying in the lava on it for a meme screenshot, made a lot of people who did not want to participate, wish that they were able to observer those choosing to attempt the Labyrinth's especially to watch players who struggled significantly on it. Thus, WhimsyBridges suggested making a viewing area for any 3.0 level that could have one, and offered to build them. They turned out to be nice cosy areas adjacent to a lava honey slime ice block parkour, as well as a cactus parkour so that people could watch the pain take place on this level. As of May 1, 2020, the Labyrinth is complete and ready to be opened on May 2, 2020.

After 3 hours of dedication, NaomiPaoni, completed the Labyrinth followed very shortly by YourLocalPiebro.

As stated above, there will only be one winner for the labyrinth. As long as that person does not use banned items such as, Chorus Fruit, Ender Pearls, Totems of Undying, Potions, or Golden Apples, then they will qualify for the prize. 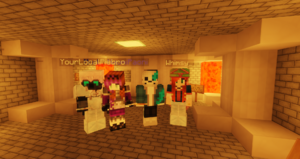 The Grand prize included the following:

Everyone who makes it to the finish will also receive the "Labyrinth Survivor" prefix, and the "I'm in pain" achievement.