The Blue Kingdom is located at the end of the Nether Hub's blue highway. Featuring the theme of a medieval castle with a wall around its border, it saw massive growth in membership during its first week; due to the dedication of both the founders and the town residents, the infrastructure has been progressed rapidly. 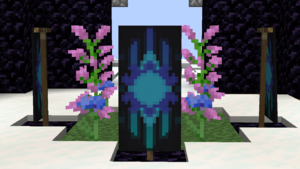 Icarus is a series of floating islands north of the Castle and is currently home to high-ranking members of the Kingdom.

The Lower Blue Kingdom (LBK) is the Kingdom's first (and currently largest) official district; unintentionally created, the unused area was settled by a handful of new Kingdom residents. LBK is located in the North-Western Region of the central walls.

The Capital is the main region of the Kingdom; while it was originally where 'higher-ranked' members of the town lived, it has been largely converted to an area for shops and other industrial facilities.

The Upper Blue Kingdom (UBK) Is a small district in the North-Eastern region of the kingdom with currently just a leader and no residents. New residents are encouraged to base here. 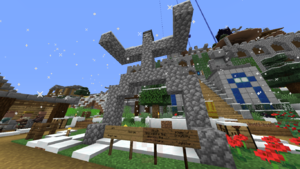 The original George, built during the first week of the kingdom's lifespan.

George is a cobblestone golem-like figure with an observer for a head originally built by Father Ergo as a holy guardian of the Blue Kingdom; standing in the Observatory, George is respected by many of the Kingdom's members. Throughout the town's lifespan, multiple George statues have appeared around the kingdom, symbolising protection and good fortune. 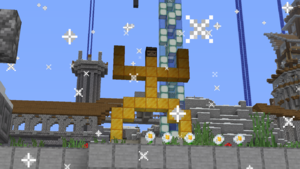 The Golden George standing on his pedestal, holding the Islands of Icarus in their place.

The Golden George is a statue of George which stands atop the Observatory on a raised pedestal. Golden George has his arms raised into the air, symbolic of the powers which lifted the islands of Icarus to the skies.

The Observatory is a building located below Icarus where the original statue of George may be found. Viewed as a church within the town, Father Ergo acts as the head cleric of the Observatory.

The Hall of 100 Georges is a large room with a 10x10 array of George statues located at the bottom of the water elevator in the main castle. While the Hall was originally proposed as a joke by Ergo and was met with harsh reception, it was eventually approved as an underground build by King Jackattack due to fondness for George spreading across the Kingdom.

The castle was originally built by Jackattack675 as a solo base, however, once more payers decided to live in the Castle, it was quickly changed to become the central storage of the town, location of the smeltery and entrance to many of the underground areas of the kingdom.

The Fountain was originally a small lake on the outskirts of the inner city; this small lake was quickly turned into a fountain which now houses the 4 central beacons of the town.