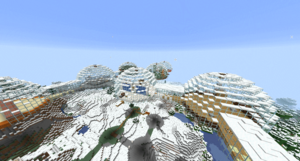 The waiting server and it's floating domes

This page is about the old Waiting server, for the current one see: Lite Waiting Server

The dome waiting server on the 1.14 Server had been developed over time. It acted as a hub with its own mini areas that people could stay in, and use it to connect their Discord and Minecraft accounts.

First created on the 11th June 2019, the waiting server was made to help act as an overflow server initially for when the main server was full. It was inspired by the previous fallback server on the previous server that James76931 ran.

This was replaced by a new Lite waiting server on the 22nd of April, to save resources between the servers.

It initially started off with only 3 domes. The spawn dome, activity area and PvP area.

The waiting server has been set up and customised by Jim and Katuen. 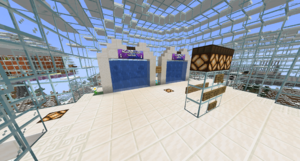 This dome started with only one portal to the Main survival server initially.

By the end it had three portals: One to the Survival server, one to the Creative server and another to the stream build server. 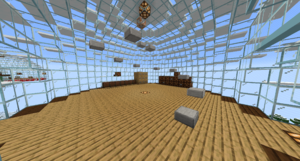 This dome was one of the first to be made, with miscellaneous things to do. 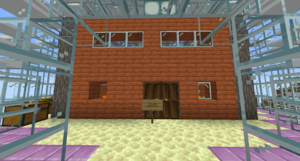 The build dome, with a build within

The build area dome featured chests on the outside of the dome, for staff to add blocks to, and then players can use them in a ~10x6x12 area.

There used to be a button to reset the area, but has been officially removed from Late September 2019.

This area later allowed users to be put into creative mode while within the build area, so players would always have materials. 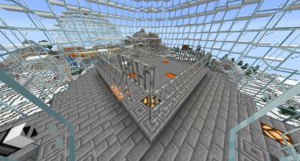 This dome featured a small raised platform of 11x11 blocks, with a few lava pools within and is surrounded by iron bars for players to PvP within.

As of early October 2019, there were command blocks to close and open the two entrances to the arena. 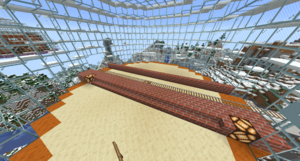 The rollercoaster dome, and entry point

Created on the 29th June. This dome featured connected train carts to act as a rollercoaster, going out, and then around the dome, before flying through the air, then it travels underground, over a lava pool, going upside down, and then returning to the dome. Each ride lasts around 41 seconds. 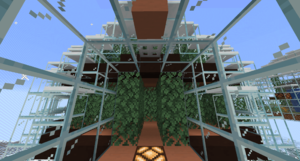 Created on the 5th October 2019, this dome featured two simple hedge mazes, on two levels, with a prize at the end for those who completed it. 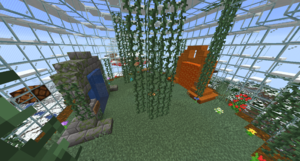 Created on 3rd November 2019, an extra dome was added with a dirt theme, behind where players spawn featuring two new portals. An old themed portal that went to the 1.13 archive server, and another made of sandstone that led to an UHC minigame server.

As of the 1.15 update being applied to the server, there were named bees within this area.

Created on the 28th December 2019, thanks to a plugin this was a small and short puzzle that once solved plays noteblock music. It features lasers, mirrors and blocks which break. The lasers burn and set players on fire.

There were multiple easter eggs on the server, some known, some yet to be discovered, some examples (but not all) are listed below