Mesachi in front of Windmill plot

Regina Gelo started out as ProbablyAPumpkin's house west of Rock Bottom. Over time, the first players were invited, including Vansity and Kisato. The name, "Regina Gelo", was coined from the Italian translation of "Queen Ice". Kisato is credited with the coinage. Kisato was given the role as Co-Mayor by ProbablyAPumpkin shortly afterward.

Regina Gelo grew extremely fast over a short period of time. Over time, more players joined, including Boyobean, Queen_Ally, Ace_of_Spades, and many more. By the end of May 2019, the population had reached 45 players. The town grew in the span of time where RT's fanbase grew exponentially, and the town was able to adopt the new residents. 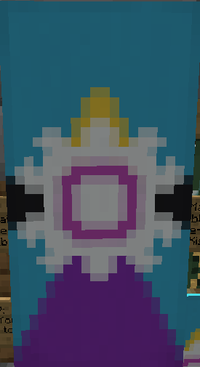 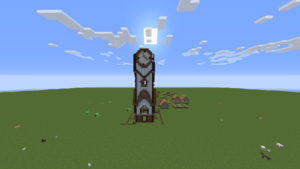 Sketched up Clocktower in singleplayer creative 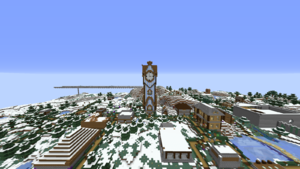 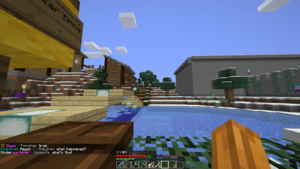 The Snowman Building Club was built by Boyobean. It was the first of many public buildings built in Regina Gelo.

Town Hall was scheduled to be built in the Town Center by Boyobean. However, the project was left unfinished and never came to fruition after Boyobean quit the server shortly after the start of the construction. Afterward, Boyobean was demoted as a public builder. He has not joined the server since.

The 2nd attempt was started by Ansome. Progress was too slow to meet the 1.12/1.13 server's reset and was not finished.

The Mist was a trading shop in Regina Gelo. This build was mainly built by Kisato, with some help from Boyobean and ProbablyAPumpkin. The Mist was known for standing out within the town, as it was made of birch.

The Open Trading Post was built by ProbablyAPumpkin and sold various products.

This list goes in chronological order; some residents were not recorded and therefore could not be archived. Towards the end of this list, the chronology of residents may have been mixed up.